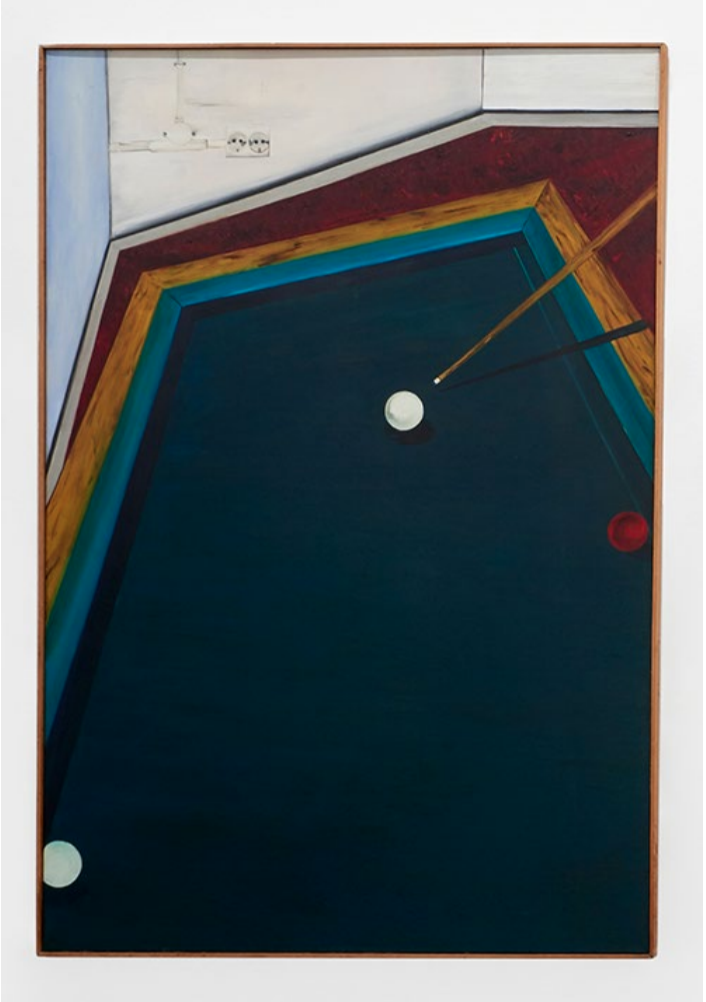 Since the 1960s, Jacqueline de Jong has evolved a complex and versatile body of work that is articulated through
varied forms and formats, finding its greatest concentration in painting. De Jong’s practice makes contact with several
touchstones of the post-war avant-garde but also forges its own counter-narrative, one that is distinctly shaped by her
intellectual vigor, aesthetic acuity and irreverent spirit. At its core, de Jong’s work is an account of what she recognizes
as three dominant ingredients of humanity: eroticism, humor and violence.
Billiards, 1976-78 marks Château Shatto’s second solo exhibition with Jacqueline de Jong and the first occasion that
the artist’s ‘billiards’ series has been the subject of a dedicated exhibition since the paintings were initially shown. The
exhibition opens concurrently with de Jong’s retrospective at the Stedelijk Museum, which also includes examples from
this series.

In the game of billiards, many of de Jong’s intrigues align: structurally, it is a game with an underlying system
determining rules of exchange; semantically, it is rich with innuendo and the suggestion of sex; and formally, the billiard
table reproduces the rectilinear plane of a painting. What is depicted in these works is not the tactics or outcome of the
game, but the latent tensions and interpersonal dynamics that play out in this ‘wordless theatre’.*
While the game itself doesn’t require dialogue, it’s the names given to the objects and actions of billiards that account
for at least some of de Jong’s attraction to this subject. In a catalogue from a 1977 exhibition of ‘billiards paintings’ at
Gallery Brinkman, Amsterdam, de Jong remarks: Billiards is bursting with eroticism: a game played with cue and balls,
with terms such as massage, piqué, touché. The cue tip, which is twisted into the blue chalk. The space between visual
representation and linguistic expression concerns de Jong throughout the span of her six decade practice, and is neatly
inflected in these works
The first decade of Jacqueline de Jong’s painting practice ran alongside her involvement with the Situationist
International (1960-1962) and subsequent expulsion, and the editing and publication of her seminal magazine
The Situationist Times (1962-67). De Jong’s first serious efforts in painting take place in the early 1960s and are
characterized by emphatic and abstract gesture. Her alliance with Gruppe SPUR and exchange with Asger Jorn are
evidenced in these canvases.
In the mid-1960s, figures begin to emerge in de Jong’s dense and impasto compositions, and towards the end of the
1960s, the artist begins to explore narrative figuration. At this time, De Jong migrates the editing processes of producing
graphic layouts for The Situationist Times across to painting. This becomes a useful strategy as she grapples with
interpreting an increasingly-saturated media landscape. De Jong’s hinged diptychs realized during this period are the
inventive and intelligent byproducts of this quickened processing.
De Jong’s ‘billiard paintings’ are also the first occasion in which figuration is harnessed in service of realism in her work.
In the late 1970s, she shifts from a hallucinatory glut of images consolidated in painting towards something deeply
observational and precise with space. This transition speaks to de Jong’s increasing affinity for allegory and suggestion;
for undercurrents. With accomplished composition and technique, de Jong is able to explore the social, systemic and
semantic depths of an activity as quotidian but semantically charged as billiards.
*Ed Wingen, Jacqueline de Jong Undercover in the World of Art, 2003.
Jacqueline de Jong was born in Hengelo in 1939. In 2019, she was awarded Prix AWARE for Outstanding Merit,
presented at the Ministry for Culture in Paris, France. De Jong’s work is currently the subject of a retrospective at the
Stedelijk Museum in Amsterdam, following a survey of her major works at les Abattoirs, Museum of Modern and
Contemporary Art, Toulouse, in 2018. Solo exhibitions of de Jong’s work have been presented at Malmö Konsthall,
Malmö; Moderna Museet, Stockholm; Torpedo/PUB, Oslo; and onestar press, Paris. Her work has been included in
exhibitions at Musée d’Art Moderne de la Ville de Paris, Paris; Haus der Kulturen der Welt, Berlin; MAMCO, Geneva;
Kunsthalle Bern, Bern; Frans Hals Museum, Haarlem; Museum of Contemporary Art, UMASS, Amherst; Simon Lee
Gallery, New York; Petzel Gallery, New York; Mendes Wood DM, Brussels; and The Club, Tokyo.

Posted in Blog
← Prix AWAREBook launch – THESE ARE SITUATIONIST TIMES! →