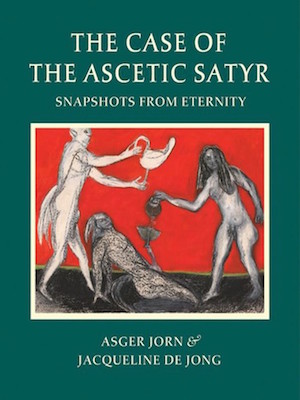 The Case of the Ascetic Satyr:
In 1962, while living in Paris, Dutch painter, sculptor and editor of The Situationist Times Jacqueline de Jong (born 1939) completed a set of 11 woodcut engravings, a medium in which she rarely worked. Danish painter and writer Asger Jorn (1914–1973) adored the engravings and decided to publish them. First, however, Jorn decided to compose a set of texts to accompany the art work, turning the suite of engravings into an “erotic novel” which they called “The Case of the Ascetic Satyr.” Over the course of the next decade they jotted down playful (and occasionally sexually explicit) notes to each other on anything that came to hand — exhibition flyers, cocktail napkins, even an unused sheet from Memoires, Jorn’s famous collaborative artist’s book with Guy Debord. The texts are mostly in English, the language Jorn and de Jong usually used together, though some are in French, Danish, Dutch or German. Wordplay is prevalent, sometimes referring to James Joyce’s Finnegans Wake.

In the end, the book project outlasted the relationship between the two artists, and so was never published. This artist’s book is thus not so much a facsimile as a true first edition, with the prints accompanied by replicas of the notes between the two lovers. A companion volume includes essays on the piece by leading art historians in the field, Kevin Repp, Marc Lenot, Roberto Ohrt, Karen Kurszinsky and Axel Heil. 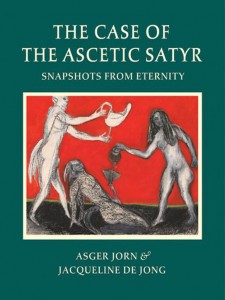 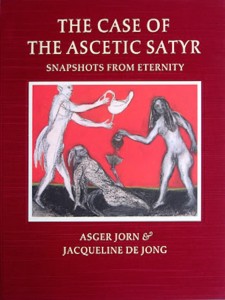